Twenty-five years since the election of Nelson Mandela as president of South Africa, the country remains home to some of the most market-invasive, race-based economic policies in the world. At the heart of this system are provisions for Affirmative Action (AA) and unique statutory measures for Black Economic Empowerment (BEE). These laws are suffocating the South African economy.

AA and BEE developed in the context of post-apartheid South Africa. Affirmative Action is mandated by the Employment Equity Act of 1998, which mandates companies to alter their workforces until they reflect the racial composition of the local economically active population.

BEE was introduced formally in 2003 as the Broad-Based Black Economic Empowerment Act (BBBEE Act). It goes much further than AA, requiring companies in South Africa to structure their corporate ownership, boards, management, staff, procurement, and charity based on racial classification.

The “whiter” a company’s shareholders, board, management, employees and suppliers, the lower its BEE score (yes, there is an actual scorecard). The “blacker” a company, the higher its BEE score. In the mining industry, the BEE Charter (an industry regulation in terms of the B-BBEE Act) requires a 30% BEE shareholding in companies applying for a new mining right.

South Africans are still racially classified for BEE and AA purposes. The most favoured group is those classified as “black/African,” regarded as the most disadvantaged during Apartheid, the unjust system of racially-applied laws that the government began dismantling nearly 30 years ago. The next most favoured groups are “coloureds” (a group descending from Europeans, indigenous Africans, and Indo-Malayans) and “indians” (descendants of Indian settlers). These groups are deemed to have been disadvantaged by Apartheid, but not as much as blacks were. The least favoured group for AA and BEE purposes is “whites,” both Afrikaans- and English-speaking, who descend mainly from European settlers (or are recent European settlers themselves) who arrived in the region predominantly from the mid-17 th Century until the latter half of the 20th Century.

The Pervasiveness of BEE

BEE is designed to influence almost all businesses in South Africa and compels compliance with its race-based criteria. State taxation and repurposed spending accounts directly for about one-third of all sales turnover in the South African economy, so BEE exerts a tremendous direct influence over the business sector. Companies with no or low BEE scores move to the back of the queue for state contracts.

But the influence of BEE goes much further. BEE scores depend on the BEE scores of a firm’s suppliers too. Large firms, especially those in the running for state contracts, routinely require their smaller suppliers to improve their BEE scores, which in turn need their even smaller suppliers to do the same, and so on. The result is a permeation of a high degree of BEE compliance across the entire economy, monitored and administered by an army of HR administration staff.

The statutory BEE requirements for state contracts are supplemented by a moral and ethical culture of “Transformation” in which it is deemed a just imperative to maintain and indeed deepen race-based legislation. This “transformationism” is promoted in all spheres of the state, in the courts, the major universities, and cheered on by large publicly listed firms.

One might expect that as time passes, such legislation would be deemed less necessary and be phased out. In practice, since its statutory inception in 2003, BEE Codes have been made more prescriptive, compelling firms to transact according to ever more racial criteria to maintain their BEE score. The codes have shifted to favour ‘blacker’ firms even more. Some companies’ BEE scores have diminished because the owners are coloured people. When revised codes stipulated lower scores for owners who are not “fully” black, their scores fell, causing them to lose contracts!

BEE has increasingly been jumping the fence into the sphere of anti-trust. After a recent legislative amendment, South Africa’s Competition Commission, the extra-judicial body tasked with policing anti-trust, will now take race even more into account when assessing market dominance, mergers and acquisitions, pricing and so on. Companies with higher BEE scores are likely to be judged more leniently by anti-trust mandarins.

A Pernicious Form of Socialism

BEE is a system that erects new incentives and costs for certain economic transactions. It is intended to achieve a different allocation of labour and resources compared to what would arise in a purely free market, with more emphasis on peoples’ classified race and their political connections and less on the value of their product or service.

BEE uses the power of the state to divert action toward the pursuit of subjectively less valued ends with more costly means than otherwise would have been undertaken. Factors of production are therefore rendered less productive, reducing value (real wealth).

Fewer goods produced and available for consumption means a higher cost of living and diminishes living standards compared to what they otherwise would have been.

As BEE policy intensifies, it destroys more wealth. With less wealth created, the amount that the state can extract through taxation from the productive sector diminishes. This loss incentivises the state to raise tax rates even higher, borrow more (raising future taxes), and print more money (taxing wealth via currency debasement) to keep resources flowing into state coffers.

In South Africa, racial state policy in the post-apartheid era has led to a vicious cycle of policy begetting wealth-destruction, leading to political dissatisfaction, generating demands by politically connected groups for more draconian racial policy, and so on.

By reducing overall returns on capital while raising regime uncertainty, BEE increases investment risk and lowers levels of investment.[1] Since productivity is a function of the depth and breadth of the capital structure, lower levels of quality capital investment (higher levels of consumption) under a BEE regime lead to further reductions in productivity.

Essentially, BEE results in capital misallocation and capital consumption and redistributes wealth from voluntarily-determined to politically-determined wealth-possessors. This process reduces the productive capacity of the economy and slows the rate of creation of valued goods and services.

South Africa has been one of the globe’s growth underperformers since it implemented BEE policies in 2004. In the chart below, we compare nominal GDP per capita denominated in dollars (based to 100 in 2005) across various emerging market and commodity-producing countries. South Africa’s GDP per capita grew by 15% in nominal dollar terms since 2005, while the mean of the sample (excluding South Africa) increased by 115% (i.e. more than doubled). 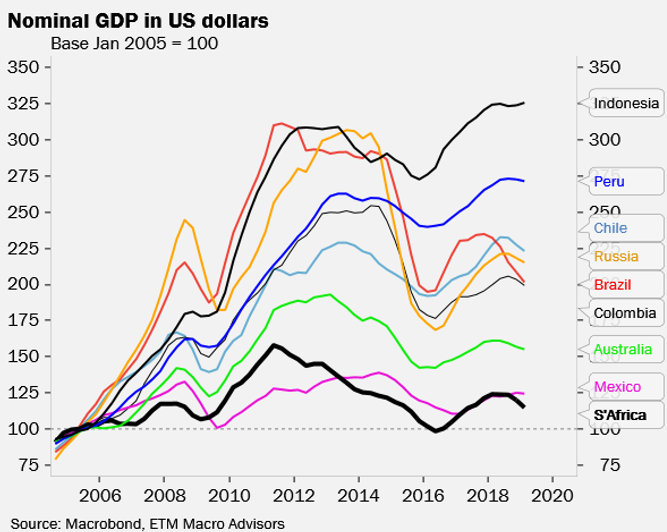 Many factors contribute to the rate of aggregate economic output in a country. South Africa’s glaring underperformance (along with Mexico) compared to similar peer countries implies that it has other restrictions on growth that pertain to the efficiency of markets and the misallocation and misappropriation of resources through political means. BEE’s far reach into the economy, and its scope for resource waste and political corruption make it a prime candidate for explaining a significant portion of South Africa’s weak economic performance.

BEE in South Africa is a form of racial socialism. It forces productive members from all cultural communities to subsidise connected political opportunists. BEE, therefore, leads to a greater emphasis on getting ahead using coercive means and a lower emphasis on getting ahead with voluntary actions. Instead of spending limited time focused on serving the needs of others using resources efficiently, much time and effort is spent securing political favour, jostling for political positions, deemphasising the needs of customers relative to those of compliance officers, and having a lower regard for economising resources and the formation of productive capital.[2]

The net effect is wealth destruction and perpetuation of chronic, widespread poverty. South Africa’s per capita GDP, at around $6,000 in 2019, has not increased in inflation-adjusted terms in a quarter-century and is down about 10% since the introduction of BEE. Meanwhile, the mean increase in real per capita dollar GDP in our sample since 2004 has been around 70%[3]. If South Africa had grown in line with the sample mean since 2004, per capita GDP would be nearly double what it is today. 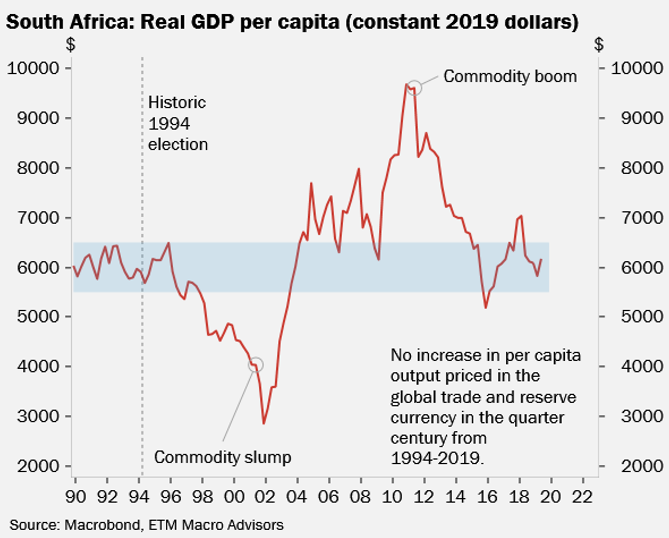 BEE in South Africa is racial economic policy in hyperdrive. It should be a warning to other countries that trying to address historical grievances through racialised socialistic means is a recipe for failure.

Terrorists Call for Killing Jews — from UN HQ in Gaza